For a very long time, English has been considered a language that connects people from all over the world. This language connection between the world’s habitants happened a long time ago. The British governed different areas of the world. Therefore, they 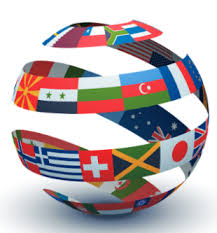 set the beginnings of English language and culture in those regions. As a consequence, British people established an “international” language although they had not intended to do that (Jyothi, 2012). Nowadays, it is one of the most spoken throughout all over the world.

Currently, as it is known, English together with Chinese, Spanish, Hindi and Arabic, is one of the most used languages worldwide. Moreover, these languages have both native and foreign speakers, something that makes them international. In this case, we are going to focus on English, a language that originated in the prehistory  and lasts until nowadays.

First of all, it is important to mention some information about the English language in order to understand how, nowadays, this language is essential. We should bear in mind that Modern Indo-European languages (including English) originated in Turkey around 9,000 years ago (Ball, 2012). Moreover, English had ten ages which are relevant to mention: the Anglo Saxon invasions (449 AD), the Viking raids (787), the Norman Conquest (1066), the resurgence of English (1200-1400), the invention of the printing press (1476), the Renaissance (1500-1650), the colonization of the new world (1600s), the age of the lexicographer (1600-1800), the industrial revolution (1760-1830) and nowadays, when English is globalizing (Interactive, 2014).

On the one hand, due to globalization, knowing English nowadays is something essential because this process of globalization has imposed a vast change in economy and in businesses. In the business world, speaking this language can be the key to find a job and if it is perfectly spoken, it could be the door to access the best jobs in enterprises. Moreover, in today’s globalized world, where there are no barriers and the global market runs through the borders via the Internet, it is important to learn English and other languages.

It is also important to highlight that 335 million people speak English as their first language and 430 million people speak it as their second language. Furthermore, on the http://www.ukstudies.com website it can be read that more than the 80% of the electronic information of the world is written in English. Another important fact is that the 80% of Internet users communicate using this language (Niño-Puello, 2013). According to Veronica Rendon (Linking and Spreading Coordinator of the Center of Teaching of Foreign Languages of the National University of Mexico), dominating a language which is not your mother tongue is a very good advantage because it can give people mobility, scholarships and access to scientific papers and conferences (Hernández, 2014).

Returning to our topic, English is considered the language of business. Due to the globalization that has been previously mentioned, enterprises have to offer and sell their products abroad if they want to continue growing. In these processes, English is completely necessary if enterprises do not want to go bankrupt because it is essential to have one language to communicate with people from all over the world. Besides, the growth of the emerging countries such as China, India, Brazil and Russia, between others, has not diminished the leadership of English in international businesses (Gonzalez, 2012). In this way, knowing and speaking English is really important if we want to promote our business making use of marketing campaigns.

Accordingly, the campaigns that are used to promote businesses should be all in English because in this way, they reach a higher number of people and it is easier that our product gets sold. Now, we are going to see an example of the importance that English has in our country to become aware that it is really necessary knowing it to promote our businesses. In Spain, almost every enterprise requires its applicants to have a good level of English. Therefore, when candidates are applying for a job in those enterprises, they have to pass an English exam to determine their knowledge about this language. In some cases, there is an alternative: Cambridge official exams. If a candidate has passed a Cambridge official exam it means that that candidate has a certain level of English, that is measured between A1 and C2. According to this example, we can see that to apply to almost every business in our country, knowing English is completely necessary.

In addition, the productivity is one of the most important things for every enterprise. Therefore, “a landslide majority of 95% of employers believes that being proficient in English improves the productivity of employees, as opposed to the 5% who don’t” (Garcia, 2015). Here, we can see that nowadays, for almost every employer, having employees who speak English is something crucial. Otherwise, making business would be impossible because what employers want is to reach a high number of buyers and when using an international language, achieving this is much easier.

To sum up, speaking English perfectly is very important for job applicants and employees because English is the language of business. As we have seen, due to globalization, enterprises have to sell and buy products abroad. Therefore, having a common language to communicate is something essential as it is easier to have a successful communication. Accordingly, nowadays, almost every job requires having knowledge of English, and speaking it can be the door to achieving a good job.